How To Heal Emotional Pain (Including Post Traumatic Stress Disorder) 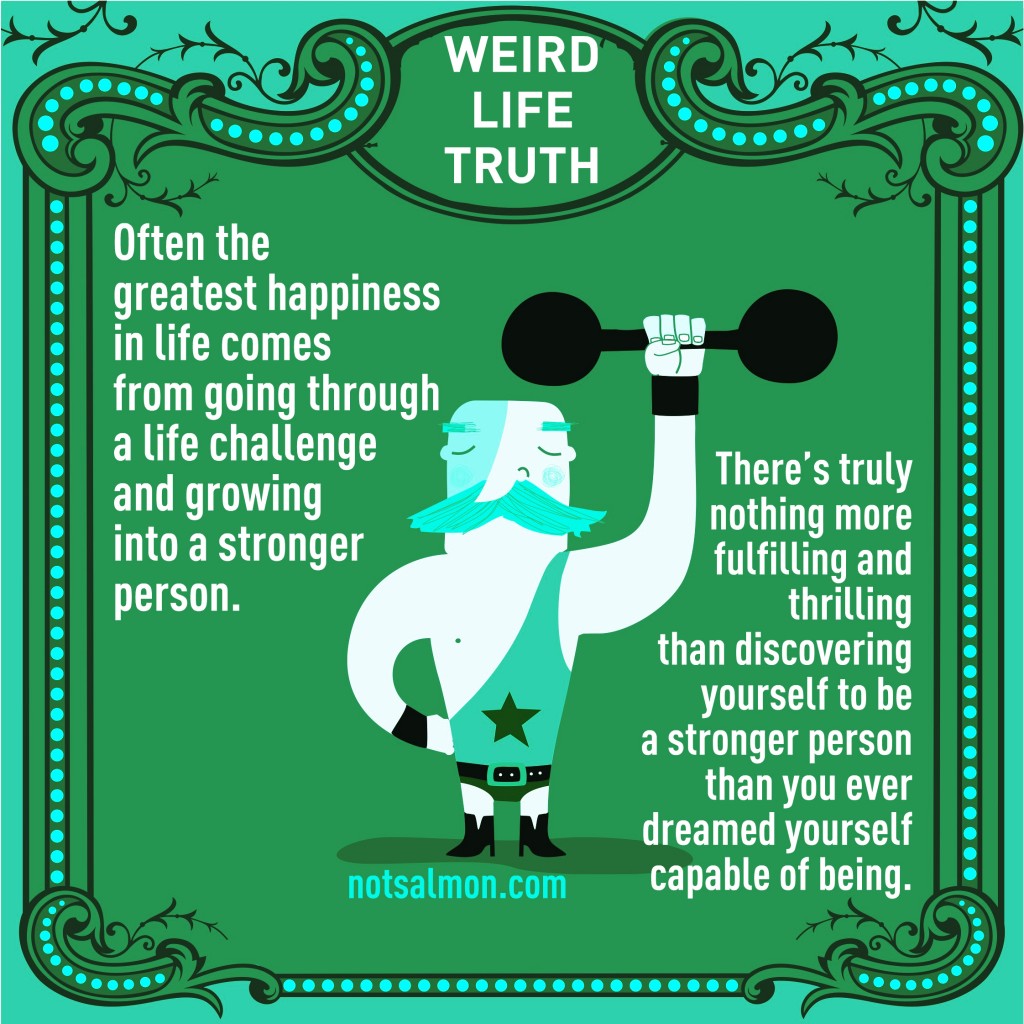 If you’re dealing with emotional pain, including Post Traumatic Stress Disorder (PTSD), read on for my personal story of healing and moving on stronger than I was before.

The Vortex, I call it.

Everyone has one in their life (at least one)—a time when you are tested in seemingly insurmountable ways—and you find yourself spiraling uncontrollably downward.

Maybe your Vortex was when you were thirteen and a parent suddenly died.

Or twenty-four and you found out your sister had breast cancer, and you got fired—both in the same month.

Or forty-two and going through a divorce.

My Vortex lasted about a year. 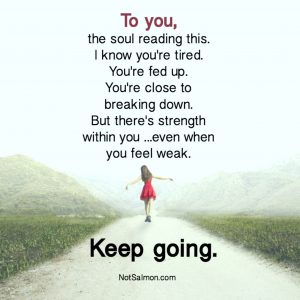 So many bad things happened, I kept waiting for a Candid Camera crew to appear from behind the planter in my living room.

First, the real estate broker, real estate lawyer, and moving company I hired found sneaky ways to rip me off. Next, a longtime business buddy hired me to package new groovy chocolate bars, then never paid me.

But those were nothing compared to the lowest point in my Vortex –  a sexual assault—which came out of nowhere—by someone I knew as an acquaintance.

As soon as I managed to get free and far away from my assaulter, I called an ex-boyfriend who was also an ex-lawyer to ask his advice.

I figured because he knew both the law and me intimately, he’d be a wise adviser. We met at a café. I was in tears.

“How could someone be so…so…so evil?” I asked.

Weak? This word somehow calmed me. 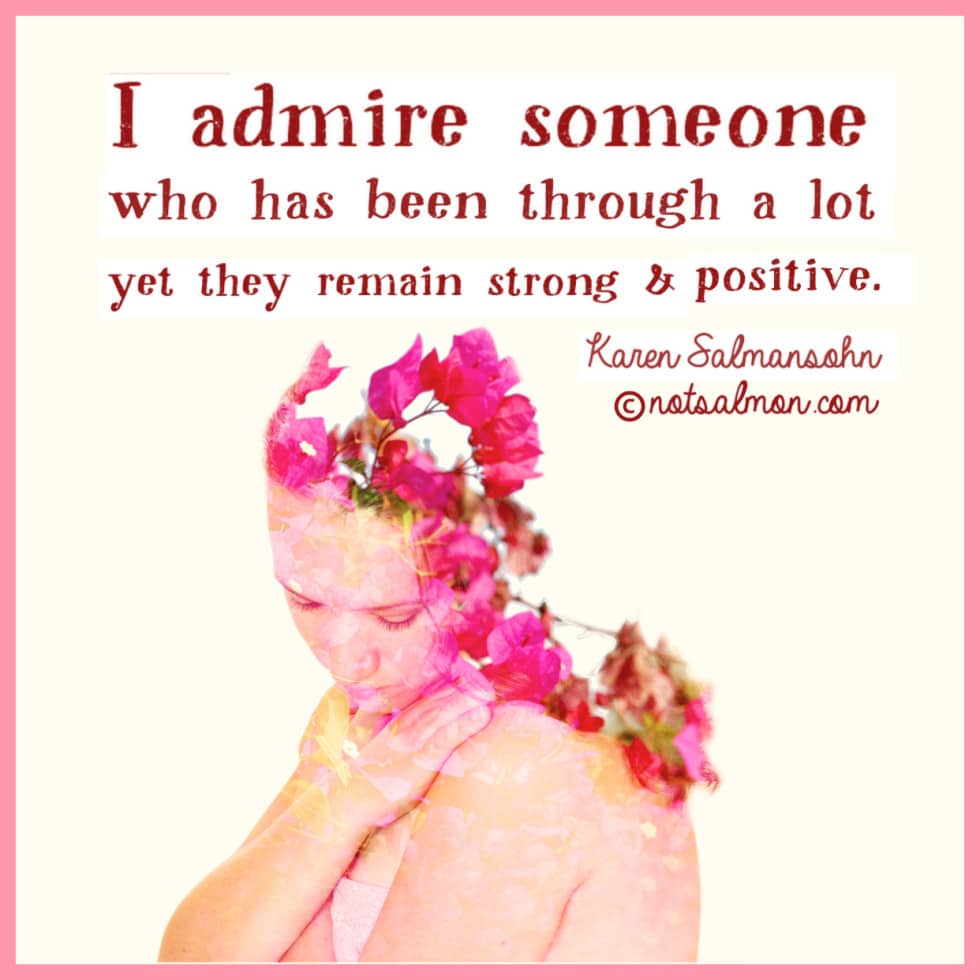 Later when I tried to understand why I preferred the word “weak” to the word “evil,” I realized that “weakness” meant there was at least hope for change in someone who’d done something evil—and most importantly, hope for me to find a way out of my Vortex by choosing not to be weak myself.

That’s when it hit me.

In life, you always have a choice.

Whichever of these paths you choose will determine your ability to bounce back from whatever . Post Traumatic Stress (PTSD) you might be dealing with.

If you want to survive life’s many challenges, you must put in the conscious effort and discipline to be a strong person.

It’s essential you create a fiery will from within—harness that power of decisiveness— and choose to be your strongest self.

Often it’s the deepest pain which empowers you to grow into your highest self.

I realize that it’s easier to lounge around in depression and angry feelings and angst than to rise above traumas and challenging circumstances.

Believe me, I know because at first I chose to follow this weaker path.

Initially I was quite traumatized by my sexual assault.

My Post Traumatic Stress Disorder (PTSD) affected me in a variety of ways. 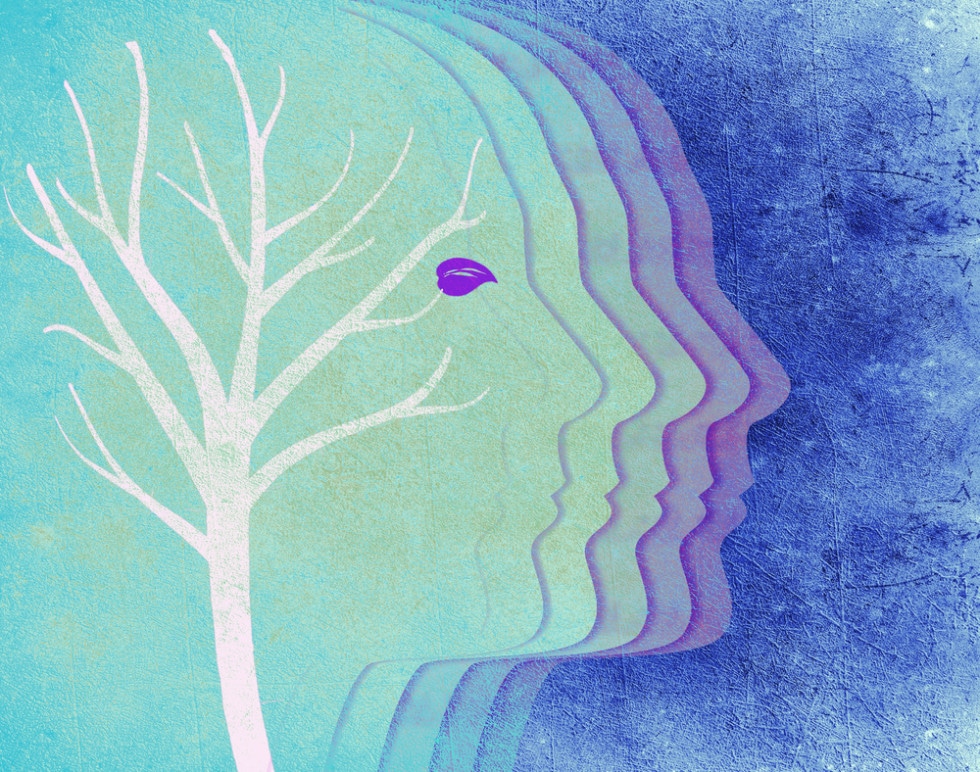 Mainly, I started experiencing anxiety around people. If I’d be writing in a café and a stranger chatted me up, my left eye would twitch.

And no, it wasn’t the caffeine. (Trust me. I’m a pro at espresso. And I’m a pro at casual conversation with strangers.)

Basically, after the assault I soon found that my Post Traumatic Stress Disorder (PTSD) created a new automatic tendency – the desire to keep all people at a distance.

I had trouble trusting anyone.

Even people I’d known for years.

After all, I’d witnessed how people could change in a moment. And so I pretty much became paranoid about everyone I came into contact with. Especially men.

Then I began gaining weight. Maybe subconsciously I figured there was safety in creating a big wad of fat between me and men’s sexual urges.

It was easy to gain weight. I had all this chocolate around my apartment from the nonpaying chocolate business buddy.

He was a bad businessman, but he made some damn good chocolate!

Soon enough, this upward weight gain created a further downward emotional spiral. I began feeling bummed about my bigger bum, which further increased my yearning to stay inside away from people and close to my chocolate bars.

I was a self-help author!

Why couldn’t I help myself get through this?

Sometimes, when I saw the growing discrepancy between who I was and how I was behaving, I’d mutter to myself in a kind of mock-voiceover: “Behind the scenes of the self-help book author…” as I unwrapped another chocolate bar. 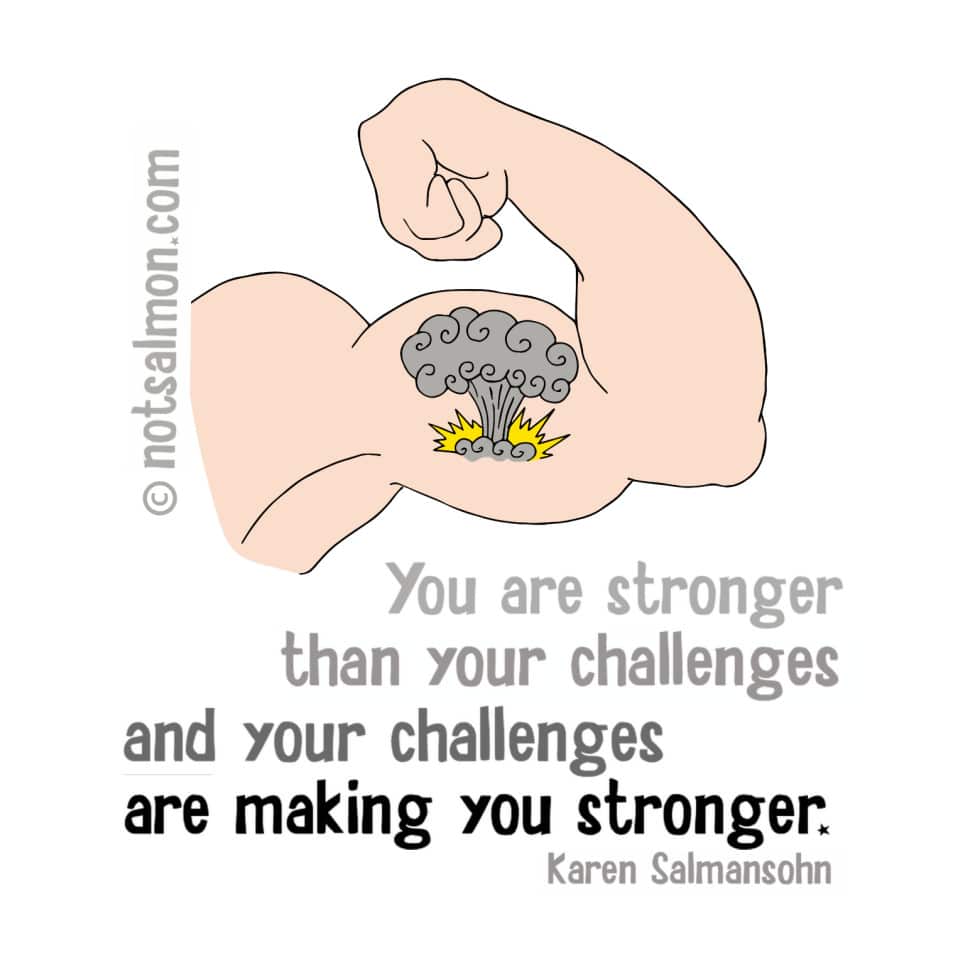 Honestly, I was surprised I’d chosen this weaker path of chocolate and withdrawal into solitude.

I’ve always thought of myself as a very strong person—as have those who know me well.

My friend David once introduced me at a party as “This is Karen. She’s a ‘doer.’ ”

Yet if I wasn’t being “disciplined and spirited” during a crisis, was I truly this me—or somebody else entirely?

I pondered this more and realized:

Who you truly are as a person is best revealed by who you are during times of conflict and crisis. 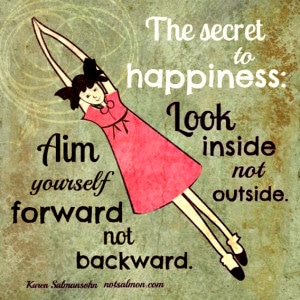 It’s easy to be your strongest, highest self when things are rolling along smoothly. But how you handle life’s setbacks and traumas reveals your authentic character.

If you can be strong during challenging times, then…well, you truly ARE a disciplined and spirited person.

This identity makes you not only a very cool person—but a very happy person.

Basically, to live a happy life takes effort and work.

Happiness is not for namby-pambies! 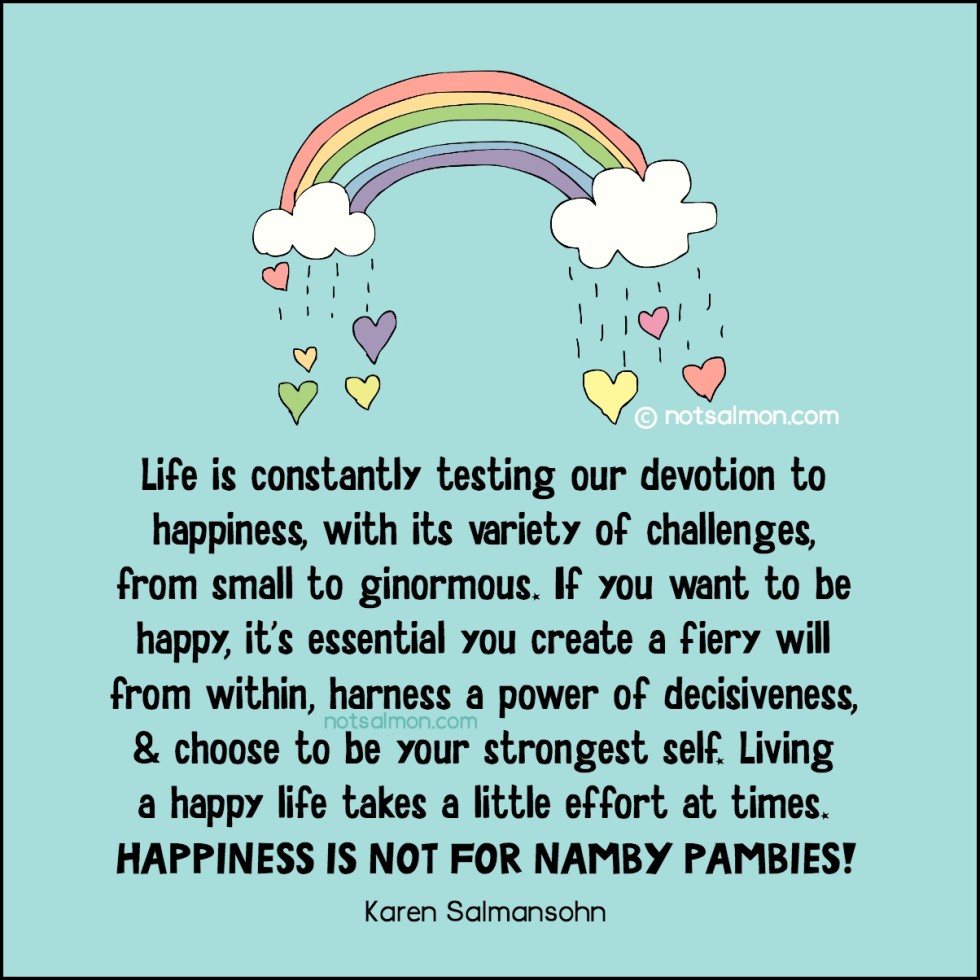 For this reason, you need to develop a long-term vision for who you uniquely value being—recognizing which core values make you the happiest—so you can stay focused on embracing these values, no matter what your trials and tribulations – including Post Traumatic Stress Disorder (PTSD).

Life is constantly testing our ability to feel and know those things.

Actually, if there were a single instructional goal for living your best life it might be

“Keep your eye on the prize of happiness, even when caught in the eye of the Vortex.” 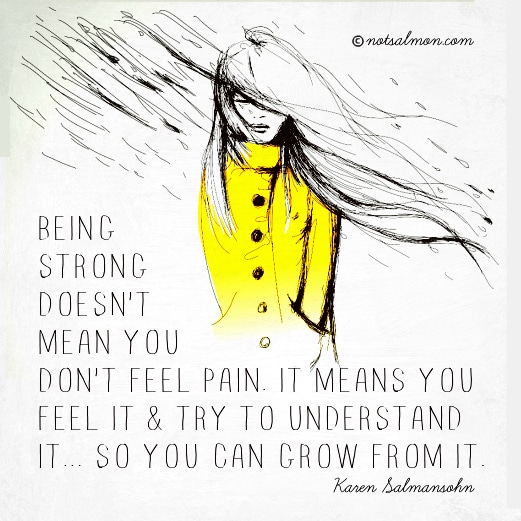 Lucky unlucky us: Often the greatest happiness in life comes from going through a crisis—and growing into a stronger, better person.

In fact, Aristotle, one of my favorite philosophers, wrote in great detail about how true happiness does not come from experiencing pleasures of the body and ego—but from having experiences that stimulate your core self—your “soul”—challenging and inspiring you to grow into your highest potential as a person.

Hence when you’re in the midst of a vortex it’s essential you put in the emotional effort to improve who you are as a person—facing your core pain—stretching yourself to become your strongest, wisest, highest-level self.

The greatest reward out there is not found OUT there at all!

It’s found INSIDE you! 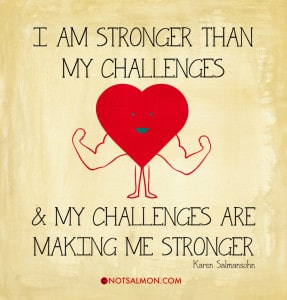 The greatest reward is knowing that you are refusing to settle for being anything less than you can be.

There’s nothing more fulfilling and thrilling than discovering yourself to be a stronger person than you ever dreamed yourself capable of being.

My Vortex made me who I am today, and the good news is, I actually like myself more because of it.

My trauma challenged me to make that choice:

And when push came to shove, I chose “be strong,” baby!posy

Read my bestselling Bounce Back Ebook loaded up with resiliency psychology tools.

How To Heal From Unbearable Grief (Moving on From Emotional Trauma)

How To Get Through Tough Times: Getting Real About Grief

Ready To Give Up On Life? Move Through This Process Of Grief

Comments area
Previous Post Want to Lose Weight Fast? Go On A Word Diet! (A Neuro-Linguistic Tool) Next Post If someone hurt you deeply to your soul, this Zombie analogy is for you!