Life is A Game And You Make The Rules: A Philosophy To Live Happier

Life is a game and you make the rules. Here’s a philosophy to become a winner at love, success, happiness – and your cheat sheet!

Or at least we tried to play.

There were no instructions.

Not knowing any of these answers made my son and I feel stressed and unhappy.

We did not enjoy playing this app game. At. All.

I’m a philosophical gal. I even named my son Ari as a “wink” to Aristotle the philosopher – who I have a platonic crush on.

So I wound up thinking about my “app unhappiness” in a philosophical way.

In particular, in an Aristotlean way.

I remembered how Aristotle was a big believer that you must begin all projects with the “final ends” in mind.

You must know exactly what you want to achieve – your mission – before you start any project.

This applies to everything from writing a book, to making dinner. Or even when it comes to approaching that gigantic project called Your Life.

Aristotle said: “Shall we not, like archers who have a mark to aim at, be more likely to hit upon what is right?”

When it comes to knowing your mission for life, Aristotle believed your final ends for life are the same as my final ends.

In fact, everyone on this planet shares the same final ends for life.

Become your best possible self!

Plus, Aristotle believed becoming your best self was not only your mission for life – but also what leads to true happiness.

Now, a lot of you right now might be wondering what the heck all of this has to do with that app game. It’s simple.

My son and I didn’t enjoy playing that app game because Aristotle was right.

You must know exactly what you want to achieve – your final ends – before you begin any project. This applies to everything – from playing app games to playing at that gigantic Game of Life.

I thought about how unhappy my son and I were when we did not know the final ends for that app game.

Next, I thought about what it takes to create happiness in life.

Life is a game.

Once you fully and clearly understand your mission for Your Life, then life becomes less stressful.

Plus once you fully and clearly understand your mission for Your Life, it becomes far easier to score those glorious life happiness points. And that’s how you become a winner at life! 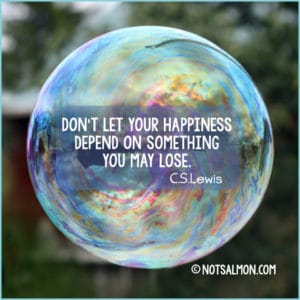 Aristotle had some particular suggestions for scoring life happiness points.

Aristotle recommended aiming yourself at “Best Self” habits – including things like:

Plus Aristotle suggested you avoid doing “Lowest Self” habits – because they’ll simply get you whacked, kicked and fire-bombed.

Plus, “Lowest Self” habits also tend to be anything impulse-directed, ego-directed, and/or body-directed – like cheating, lying, stealing, pigging out, sleeping around.

Basically Aristotle suggested you aim yourself at doing soul-directed habits.

You should do habits your soul can be proud about.

I thought about how I wished somebody had clearly told me when I was a kid this final ends mission for life. I could have avoided a lot of painful whacking, kicking and fire-bombing.

Ohhh, how I wish someone had sat me down and stated in a very matter of fact way…

“Yo Karen! There’s a reason why you are here on this planet! Your mission here is to become your best possible self!

Unfortunately, nobody ever sits us down to so succinctly explain  that this is our life’s mission.

As a result many of us wind up with highly incorrect “life missions” playing in an ongoing loop in our heads.

According to Aristotle all of these missions which are purely ego-directed and/or body-directed lead to “pleasure” – a form of “fake happiness.”

Pleasure is a temporary hit and run joy. It’s fleeting. 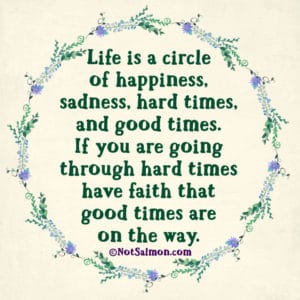 According to Aristotle, if you want to be a winner at life you have to do stuff which helps you become your best you – and this happens when you aim yourself at habits your soul can be proud about.

I believe it’s wildly helpful to have a mindful awareness that becoming your “best self” is what leads to winning at the game of life.

I believe this so much, I’m now raising my 3 year old son with this “life mission” awareness.

Basically, I want my son to know life is a game.

Specifically, I have told him:

“Ari, there’s a reason why you are here on this planet. You are here to become your best self – which also includes helping others to be their best selves and helping this world to be a better place.”

My hope is to empower my son to develop a wise inner voice  – which will guide him to avoid aiming himself at people and habits which whack, kick and firebomb him!

I explain to my son…

Life is a game – and we make the rules and choose our mission.

Now whenever I catch my son making a less than wise choice, I relate it back to his “life mission.”

Instead I remind him of his mission – to become his best self.”

Because my son loves app games, I talk to him in language he understands.

I’ve witnessed a true improvement in his behavior.

My son now on his own loves to brush his teeth, eat healthy, read books, be kind and generous.

And he even told me that his favorite Power Ranger is the red one – because his power is “studying.”

Plus my son explained, “When you study you become your best most powerful you – and you can do anything.”

I’d love to bring this “Life is A Game” concept to as many parents and educators as possible.

And I’d love to remind parents and educators how important it is to not simply blurt a “no” or  a “stop” when you catch a child doing something unwise.

Instead we must teach kids to understand the “why not” behind a “no” or a “stop.”

We must raise kids to become good choice makers on their own – even when parents and teachers are not around.

I believe an effective way to do this is to take the time to talk with kids about their mission for life – and the importance of doing habits which help you become your best you!

And speaking of YOU….

Remember: Life is a Game

I also believe that whoever YOU are – however old YOU might be – it’s helpful to think of life as a game.

Get further support to think happier

What Matters Most In Life? 12 Quotes To Remind You How To Be Happy

How to declutter your home, life – and mind! Tips to get started!

Any plans on playing that video game again? ;-))

Wonderful post + wise and helpful advice for guiding young children. It’s such a more powerful way instead of saying “no”. Thank you.

I especially loved how you’re raising your child. The subconscious cannot process negatives or the not’s and don’ts — so eventually, it’s in vain telling them not to do something. Plus children are naturally curious to know what if I did do it.

Bringing him back to the “life lesson” and letting him make up his own mind must work like a charm.

Thanks for the share Karen. Always enjoy your essays.

Mmmmm…. “Behaviors your soul can be proud of.” LOVE that! You know, Karen, there’s a great poster in there. 😉

I enjoyed your analogy…sweet! I recently ordered a manifestation bracelet and when asked by the artist what she should pray over it as she worked, my response was “Become the woman God created me to be”…I wear it daily and feel confident the entire universe is conspiring to help me!! bless your weekend xo

Previous Post How To Be Lucky In Life – Even If You’re Not Feeling Lucky Next Post If you’ve had toxic relationships of any kind, read this now!

Neglecting Your Mental Health 5 Reasons Take Better Care of Yourself
How to Smoke Meat Like a Pro: 5 Things You Need to Know
4 Tips for Creating a Family Friendly Outdoor Living Space
What Are the Benefits of Collaborative Learning?
5 Secrets To Achieve A Better Quality Of Life