If you’ve had toxic relationships of any kind, read this now! 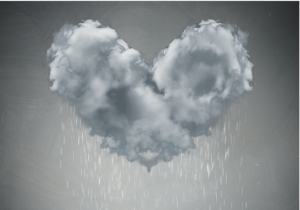 This is a vulnerable story about toxic relationships and how an unconventional therapist helped me to break my bad patterns for good.

Note: The following is an excerpt from my popular video course: Broken Heart Recovery.

About a decade and a half ago I used to joke that for me all dating should be re-named ‘blind-dating” – and instead of saying I was “seeing someone right now” – I should be more honest, and say, “I’m dimly viewing someone.”

I remember I was once “dimly viewing” this particular guy. I’ve written about him before  (here) .

I explained how every time I said this guy’s name, my girlfriends would sing the theme song to Batman. Not because this man looked great in black Spandex tights. No, no. It was because he was a bad man.

“Dadadadadadada Bad-man! Bad-man!” my girlfriends would sing, right after I’d finish telling a particularly bad Bad-man episode—of which there were many.

Let’s call this ex of mine “Bruce Wayne” – to protect his not-so-innocent secret identity.

Today I want to share something I never told you about Bruce.

Bruce’s “dadadadadada bad-behavior” began very early on – a few weeks into our relationship.

Yep, right out of the gate Bruce displayed what I felt were highly controlling and paranoically jealous behaviors.

Yet I continued to date him …although he was a toxic partner.

I even went away with Bruce for a week long vacation in Turkey – where we had a very big fight one evening.  I made a silly joke to our Turkish waiter – who then laughed – and touched my shoulder before he left our table. Bruce then became convinced that I was flirting with this Turkish waiter.

Bruce specifically wanted to know if I’d rather be dating this Turkish waiter – a man who could barely speak English – plus lived well beyond a 5,000 mile radius of my zip code.

I kept reassuring Bruce I was not the teeniest bit interested in this Turkish dude – and was highly attracted to Bruce.

Yet Bruce refused to talk to me for a full two days of our vacation!

When I came home from vacation, I sought out therapy for my toxic relationship.

I found a nice older psychotherapist, named Sid, who eventually became like a “grandfather from another great-grand-mother.” I adored Sid.

“You’ll never believe what Bruce said/did last night,” I’d begin each and every therapy session. And then I’d launch into another “Dadadadadadada Bad-man Episode”!

“You know what your problem is Karen?” Sid asked me one session.  “You’re so smart, you’re stupid.”

I laughed. “What’s that supposed to mean?”

“You are able to over-think things so much – that you wind up talking yourself out of what you already know.”

“So you think I should break up with Bruce?” I asked.

Sid sighed loudly. “I’m a therapist. I’m not supposed to tell you what to do. But if you want my honest opinion… I can’t believe you’re gonna stay with him, when he’s an asshole.”

“Actually, I didn’t call HIM an a**hole! I called YOU an a**hole. You heard me wrong. I said, ‘If you continue to stay with Bruce, then YOU are an a**hole.’”

“At this point, Karen, if you stay with Bruce knowing what you know – then YOU are the a**hole.”

I repeated this word out loud –  a word as opposite in content as a mantra could ever be – but alas, more powerful than any mantra I’d ever used.

This word “a**hole” became my wake up call!

Sid was right. If I stayed with someone who was so very toxic to my well being  – then I became the A**hole to me – for allowing this soul-crushing, freedom-squelching relationship to continue! 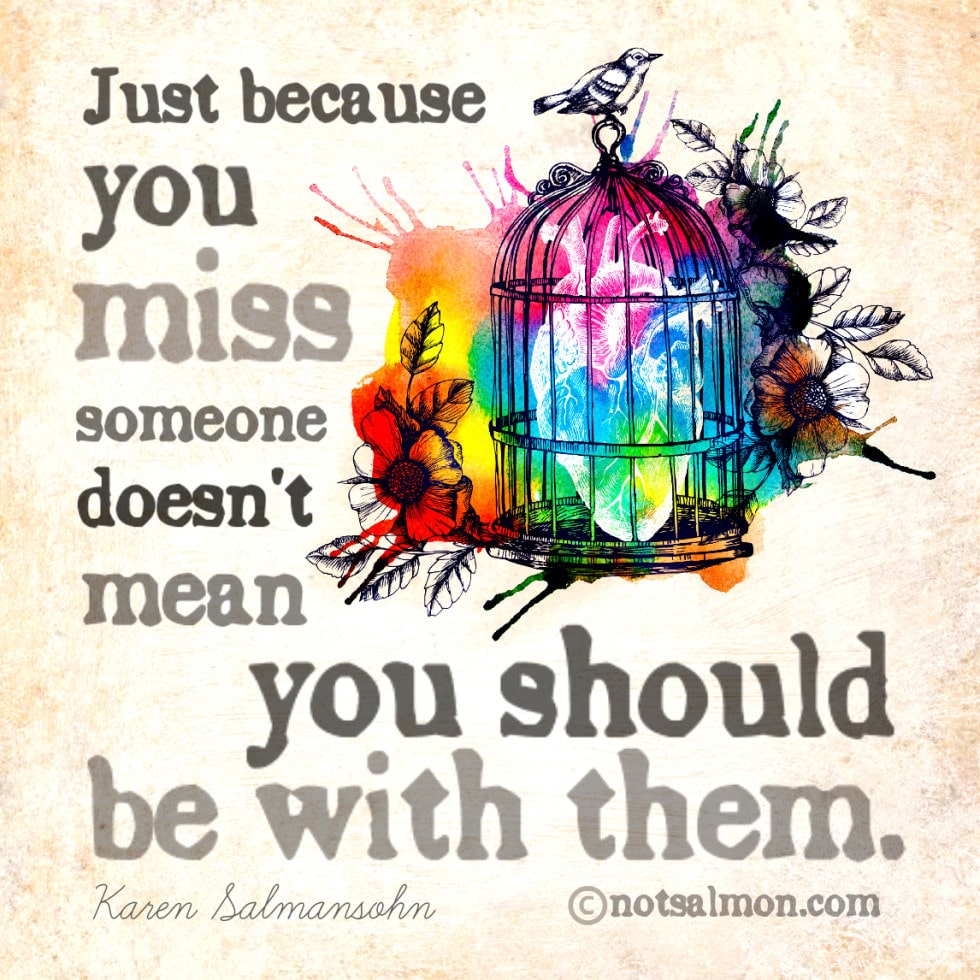 “Listen, Karen,” Sid said,  “at this point in therapy we are simply wasting time talking about Bruce – and how messed up he is. Quite frankly, you are only using stories about Bruce to distract yourself from your real issues – and the important inner work you have to do on yourself. It’s time we talk about the white elephant in the room: your wounds! There’s obviously something very wounded inside of you, that you feel the need to stay with Bruce – when he is so toxic.”

Although this story about toxic relationships happened well over a decade ago, I think about it often.

I feel if we’re not careful we can all find ourselves wasting a lot of precious tick-tocking time complaining about how badly someone is behaving towards us.

If you’re dealing with toxic relationships, you need to stop asking…

“Why is this person treating me this way?”

“Why did this person do that crappy thing to me?”

“What is wrong with this person?”

“What did I miss in the vetting process that I allowed this person into my life?”

“What is wounded inside me that I choose/chose to stay with this person for as long as I do/did?”

“How can I grow from this experience – so it doesn’t repeat itself into a bad pattern?”

“Do I want to make this a story about how I was a victim – or how I became a victor?”

“Do I want to waste my time, thoughts and energy on toxicity or use it for a higher purpose?”

“Aren’t I wise and strong for how I moved on to be with better people and live better days?” 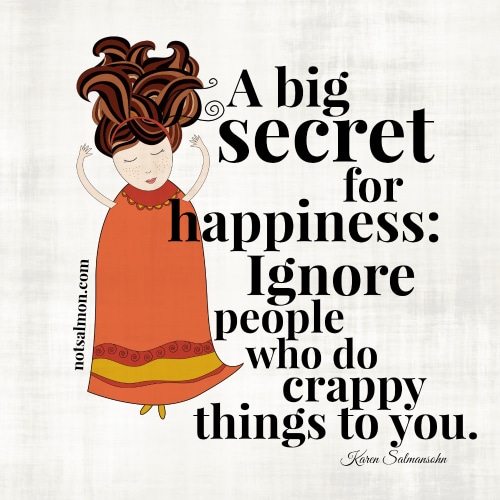 If you’re presently caught up in telling stories about the toxic misbehaviors of someone – the time has come to stop getting caught up in name-calling, contempt and blame.

The time has come to recognize you’re just distracting yourself with all the drama, chaos and static!

Yep, the more you stay with and/or complain about a toxic person, the more you’re merely delaying doing the important inner work you need to do – to heal your wounds, expand your limiting beliefs, and show yourself far more love and respect.

All of this time expended on them could be time spent on expanding you – growing who you are!

Heal & Move on From Toxic Relationships

The above was an excerpt from my groundbreaking video course Broken Heart Recovery.

If you’re struggling to heal from the pain of heartbreak – and eager to stop a pattern of unhappy relationships, learn more here!

How to Recover From Tough Times? Tell Yourself this Powerful Sentence!

Previous Post Life is A Game And You Make The Rules: A Philosophy To Live Happier Next Post Are You Sabotaging Happiness and Success? [Signs and Solutions]