“I Am My Own Worst Bully”: How To Love Yourself More 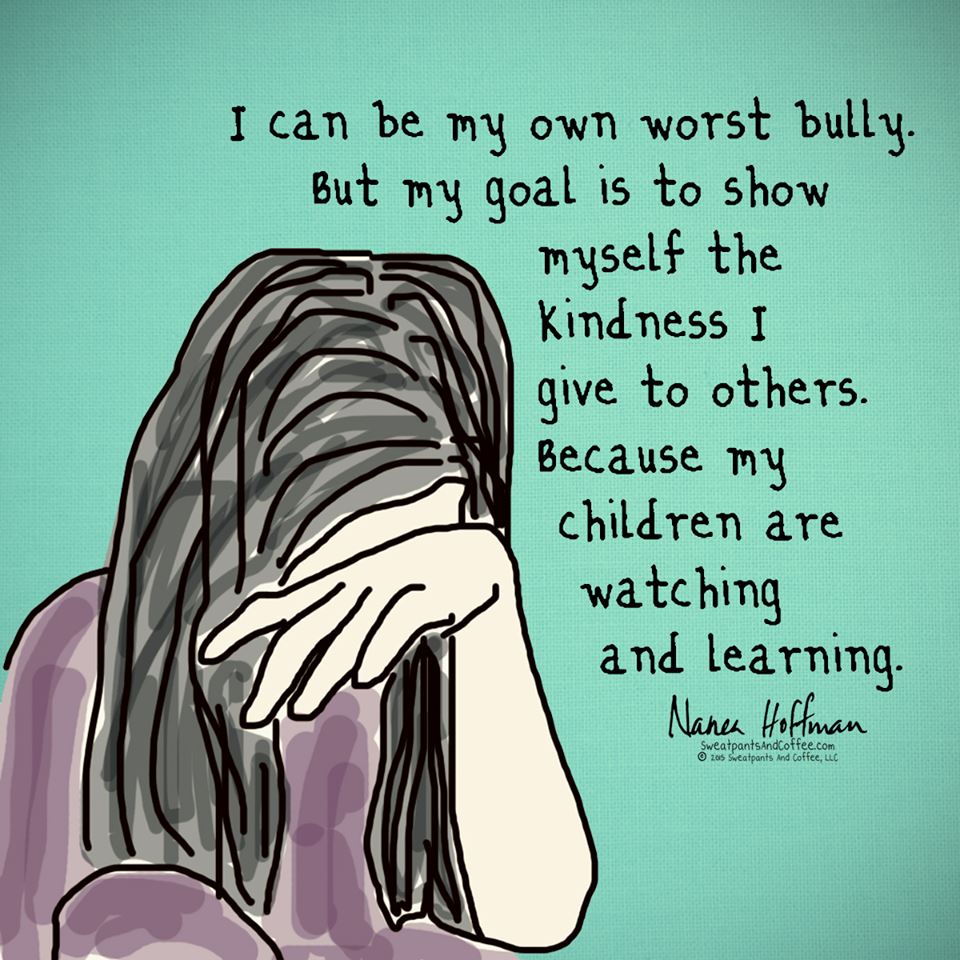 Do you find yourself thinking: “I am my own worst bully”? You’re not alone. Read on for realistic ways to love yourself more – and improve your self worth.

Note: This is a guest post by Nanea Hoffman

I was scrolling through Facebook at the end of a long day when I saw the pictures.

Someone in a private group I belong to for parents from our local Girl Scouts troop uploaded an album entitled “Pics From Our Humane Society Field Trip Today!” Or something like that.

I’m not sure, actually, because the wave of adrenaline that crashed through my body wiped out almost all coherent thought.

Except for this: Oh, no. Oh, no no no no no no no. I did it again. How had I mixed this one up? I thought for sure the notice said Thursday and it was only Tuesday! Once again, my child was going to suffer for my failings.

When I started seeing a therapist two years ago for panic attacks, generalized anxiety, and depression, I had lapses in short term memory so frequently that I had panic attacks about them. I’d wake up in a cold sweat at 2 a.m. with a horrible suspicion that I’d missed something. 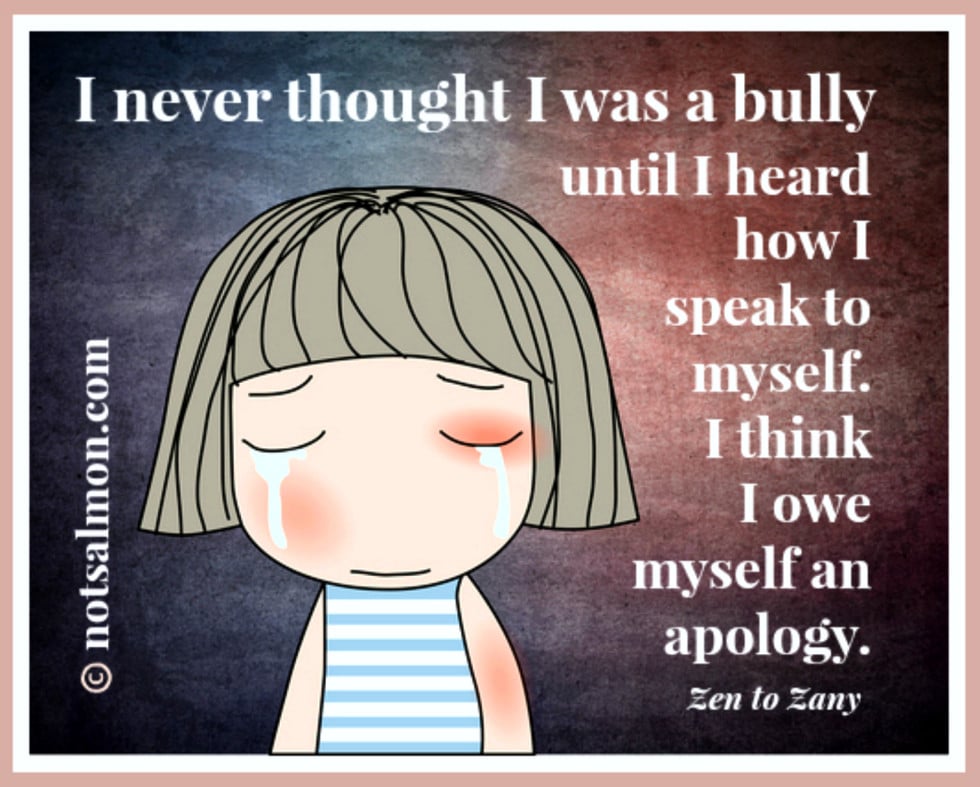 The feeling was similar to the one I have in a recurring nightmare where I’m back in college and it’s finals week.

I’ve suddenly remembered that there’s a class I’ve been cutting all semester. And the final is right now. I’m sprinting through the halls, desperately trying to remember which room it’s in.

Heart racing, sick to my stomach, throat full of dread.

You know – that feeling.

I always wake up from the dream knowing that it isn’t real, though the panic lingers in my body.

The memory lapses, however, are real, and often, I have dropped the ball.

From the Mayo Clinic:

“Stress, anxiety, or depression can cause forgetfulness, confusion, difficulty concentrating and other problems that disrupt daily activities.”

“Forgetting stuff can cause stress, anxiety, or depression.” It’s the circle of life, Simba!

When you feel like you can’t trust your own brain, you live in constant fear and guilt.

I didn’t realize that until I started the arduous process of learning to quiet my tumultuous thoughts.

Years ago, our family briefly lived in Washington state. We moved there during the rainiest winter on record up to that point.

Every single day, it was gray and drizzly. But there were occasionally what the weather report referred to as “sun breaks.”

This is when the clouds part for a few minutes to let in the sunlight.

After I’d been going to therapy for a while, and my body started to respond to the medication and regular exercise, I began experiencing “mental sun breaks.”

There were periods of clarity and calm that startled me the way a pool of sunshine on carpet startled my toddler son who had spent most of his babyhood in the cool, cloudy Pacific Northwest.

He freaked out, jabbing his little finger at it repeatedly as if to say, “WTF is THIS?”

I’d been having a mostly calm patch when the Girl Scout field trip debacle occurred.

But what I discovered is that old fears never really die.

Within seconds, I had become my own meanest mean girl.

I immediately became my own worst bully.

Here I was, the loser mom with the broken brain, letting my kid down again.

She’d been looking forward to this excursion for weeks, and now, because of me, she’d missed it.

She cried. I cried.

I fell to my knees and apologized over and over into her hair.

She patted my cheeks and told me it wasn’t my fault.

But I knew it was.

It was stunning how fast I went from marginally functioning human to loathsome bundle of neuroses.  And how quickly the dormant bad thoughts erupted.

I am my own worst bully.

I told myself: You are…

“broken.”
“a terrible mother.”
“lame and selfish.”
“a disappointment.”
“hurtful to your children.”
“lazy.”
“an irredeemable fuck-up.”
“hopeless.”

These are the moments when I learn how much work I still have to do in the perpetual construction site that is my self concept.

Because no matter how much excavation and reframing I’ve done, somewhere in the dank basement of my soul, I believe terrible things about myself.

I truly am my own worst bully.

It turns out I hadn’t mixed up the excursion days.

The pictures I saw were from an older group of girls; my daughter’s group would be going on Thursday, just as I’d thought.

A normal person would probably just go reread the original email to confirm the information.

However, I doubt myself so deeply that what I like to do is go into the bedroom and cry myself into a headache – while firing off a frantic message to the troop leader – begging to see if there’s any way I can go with my daughter on my own – so she can still at least earn her badge.

Because I am my own worst bully.

There’s no reason I can’t self-flagellate, and try to rectify my failure at the same time. Cue Whitney Houston’s “I’m Every Woman.”

The troop leader wrote back apologizing for the mix up (which I thought was awfully nice considering how clear it was that I WAS THE MIX UP.)

My daughter and I collapsed upon her messy bedroom floor in a relief hug. I drank water and took some ibuprofen for my shame headache.

Eventually, my muscles unclenched and my breathing returned to normal.

My lesson about loving myself more:

But I’m not as broken as I think.

It’s the “as I think” part that needs work.

It probably always will.

How I Tamed My Inner Bully And Now Appreciate Myself More

25 Feeling Unloved Quotes For When You Don’t Feel Loved