Feel like giving up? 4 Things To Do To Become Successful 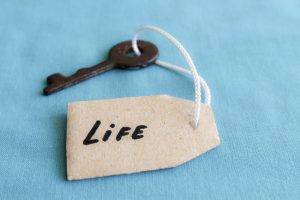 Feel like giving up? Try these 4 Success Reboot Tools – when you feel a lack of faith and confidence – and stay motivated to become successful!

I’m a big believer that the path to getting what you want is rarely a straight one-way street.

There are many detours and speed bumps along the way to success.

With this in mind, let me tell you about a guy named Colonel Harland Sanders.

When the Colonel first tried to sell his chicken recipe he was 65 years old — with only a small pension — a tiny bit of money in the bank — and an old Caddie roadster.

His first plan was to sell his chicken recipe to restaurant owners, who’d give him a residual for every chicken piece sold — a nickle per chicken.

He knocked on the first restaurateur’s door, and was greeted by a NOPE.

In fact his first 1,008 sales calls all served up a NOPE.

Still, the Colonel continued to call on owners,  as he traveled across the USA, sleeping in his Caddie to save money.

It wasn’t until prospect number 1,009 that the Colonel received his first  YES. Then, after two 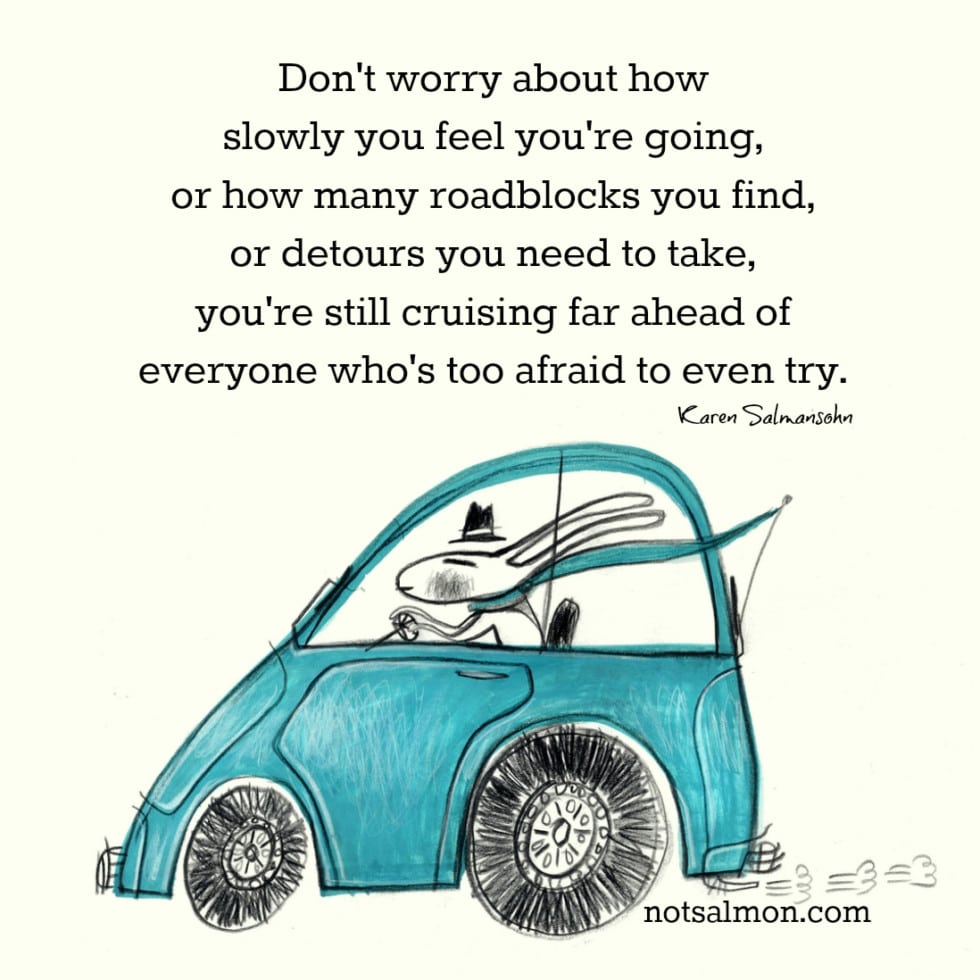 years of making daily sales he had only signed up a total of five restaurants. Still the Colonel kept knocking on doors.

I love this story – because it’s an “against all odds” tale.

The Colonel was a senior citizen, with no money, entering a new field – and yet he succeeded! How? He knew how to reboot his happiness after failure – instead of re-fueling his fears, insecurities and (b)lame excuses.

Robert Louis Stevenson said it well when he said:

“To know what you prefer, instead of humbly saying amen to what the world tells you that you ought to prefer, is to have kept your soul alive.” I want to help you keep your soul alive so you can live your happiest life!”

4 Things To Do To Stay Motivated to Become Successful

1. BAN “ALWAYS” AND “NEVER” FROM YOUR VOCABULARY!

Seligman suggests you become aware of using too much “pervasiveness” and “permanence” in your stories. Meaning?

“This always happens to me.” Or “I can never get abreak.” Or “The opposite sex is always this way.” Or “People my age can never change.”

Fess up! How many times do you use “always” and “never” when you’re telling your story  about the zig zags and bumps in your life?

Know this now: Any time you find yourself saying “always” and “never” you are creating (b)lame excuses – and thereby getting in your own way of the joy you are seeking!

Your new goal: Rewrite the story  of your life without using “always” and “never.”

Need help? Put all your present destructive beliefs  on trial! Cross-examine each destructive belief like a tough attorney – brainstorming new ways to dispute and discredit your (b)lame excuses—by gathering “positive evidence” to the contrary.

Come up with a long list of proof of your abilities to pillage and conquer – or proof of other people who have accomplished what you want at your age or with whatever (b)lame excuse disadvantage you are telling yourself that you have!

Dispute and discredit every “always” and “never” – and their accompanying “false fears” by gathering a plethora of “contradictory evidence” —proving to yourself that your limited beliefs are just that—limited! 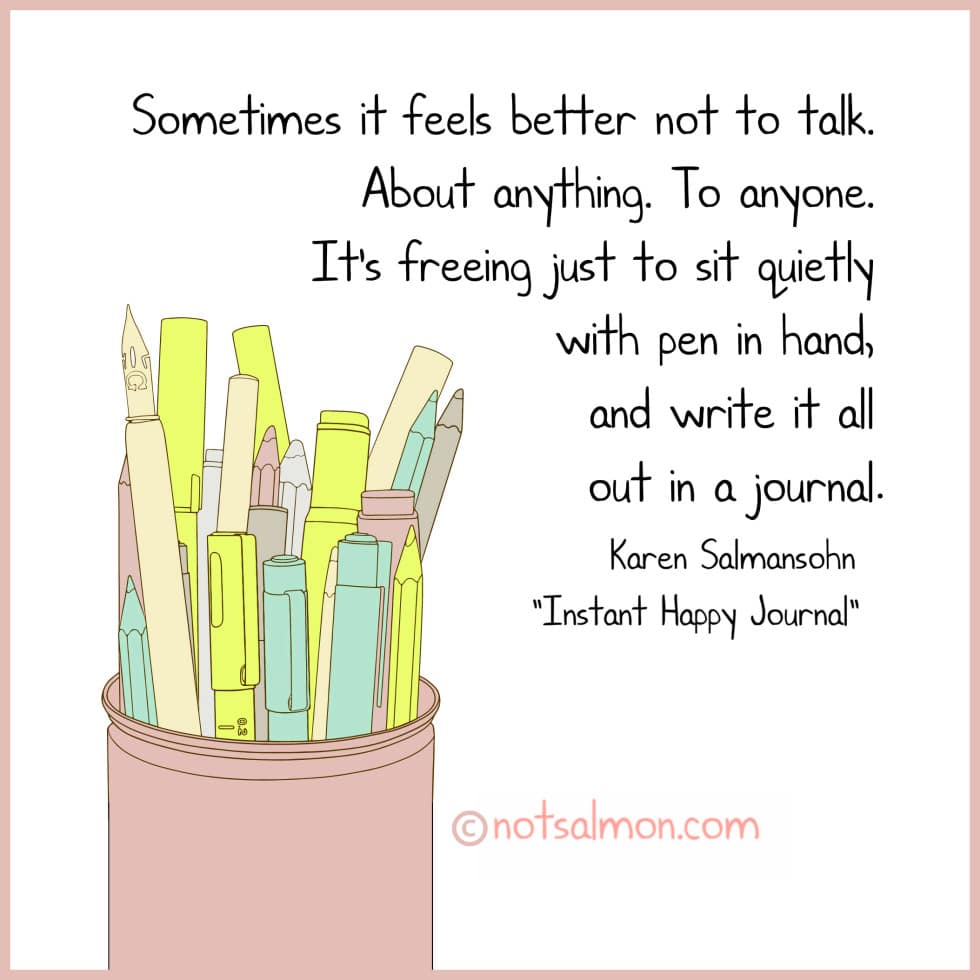 Writing helps you clarify and organize your scattered thoughts and goals.

Because I love journals, I create a special one – you can check out – called Instant Happy Journal – which is coming out from Random House.

Or feel free to buy any journal and write in the front “The Year I Created My Empire” or “The Year I Pillaged And Conquered” – or something fun and inspiring which resonates with you.

Plus keep motivational lists and crystallized goals on little pieces of papers – in places where you might see them often (your wallet, a post-it note on your bathroom mirror, in a file on your laptop, etc) to stop you from falling off the Joyful Life Bandwagon!

3. KNOW THAT “SEEDING IS BELIEVING.”

Overnight success RARELY happens overnight.  But it doesn’t mean it’s not a-comin’ when it’s slow in a-comin’. You know how if you plant seeds, it takes time for the fruits of these seeds to grow  — push up through the ground’s surface?

Ditto on your new thought seeds and habit seeds.  They take

time to manifest into the change you are seeking. Hence, while you’re on your path to greatness, it’s important to keep reassuring yourself that what you see with your limited short-term lens is not necessarily what you are getting in your long-term future.

It’s essential to recognize that SEEING IS NOT ALWAYS BELIEVING.

However, SEEDING IS BELIEVING.

What you seed is what you get.

If you are seeding positive thoughts and positive habits, then success will eventually blossom.

If you’re starting to feel itchy and twitchy because change is not happening as speedily as you want, envision what you want on a delivery truck coming towards you  – just a wee bit stuck in traffic – but coming towards you right now – maybe even a week from next Tuesday!

4. YOU ARE NOT ONLY WHAT YOU EAT – YOU’RE WHAT YOU DRINK!

If you want to keep your soul alive to accomplish your goals, you have to keep your body well nourished and hydrated.

One quickie tip: You can start by eating lots of fish. In fact, Dr. Joseph R. Hibbeln performed a study which showed that high fish-eating countries like Japan and Taiwan have very low rates of depression, while low fish-eating countries like Germany and the U.S. have high rates. Indeed, overall, major depression is 60 times more prevalent in countries where little fish is eaten. Preferably eat your fish in a “supercharged meal” – which means having your healthful fish, with some healthful carb (brown rice), and some healthful greens (salad or spinach).

Plus research shows that there is a 10% decrease in your mental performance when you feel thirsty. Meaning, you should drink lots of water – and also drink beverages that support rapid hydration –  like Coconut Water!

Feed your mind positive thoughts and your body healthy foods and beverages – and you’ll stay motivated to become a high achieving person.

How To Stop Comparing Yourself To Others and Avoid Poison Envy

What Parents Can Learn From Kids: Things Children Teach Adults

Comments area
Previous Post How To Use NLP to Let Go And Find Peace of Mind In Hard Times Next Post Having A Tough Time Viewing An Unexpected Path As The Better Path?