Childless: Regrets and Advice from a Childfree Woman

Growing up, I rebelled against my beautiful redheaded mother, a domestic goddess. A feisty orphan from the Lower East Side, she had revered the four older siblings who took care of her.

She married my father at 19, planning to start her own big family. After working as a secretary and office manager to put him through medical school in the Midwest, she became a proud stay-at-home mom.

She had me at 27, then my carrot-top brothers arrived, 17 months apart (called “Yiddish twins”), followed by a third boy.

As the oldest and only girl, I was “mommy’s little helper,” which I resented. She was always cooking, feeding, cleaning. I felt born in the wrong role. I resolved to escape taking care of babies.

Like my own mom, I fell in love with a handsome pre-med as a teenager. A few years later, the condoms we used failed and I was late. He sweetly offered a ring and would have made a good father. But unlike Mom, I was dark-haired, liberal, ambitious and unready to wed at 19.

At 35, I joyously danced down the aisle in a black dress, beside a tall, sardonic screenwriter I adored. We worked crazy hours, teaching by night to pay rent. Five years later, finally debt-free and able to afford a spacious two-bedroom, I went off the pill. Nothing happened.

Infertility tests showed we were both Tay-Sachs carriers, a degenerative disease known to kill the child by age 4.

In vitro with genetic engineering would cost $30,000 that we didn’t have, with a chance the Tay-Sachs couldn’t be determined until an amniocentesis.

“Maybe it’s not meant to be,” said my close girlfriend in the suburbs, whose I.V.F. treatments led to disabled twins. “My husband and I only wanted kids. You want the big city, a passionate marriage, exciting professions. You couldn’t handle this.”

I took her warning to heart. We stopped trying.

I called my male therapist a chauvinist pig when he labeled my childlessness “a biological tragedy.”

What seemed tragic was that it took me until my 40s to feel together enough to bear a child. By then it was too late.

I feared God was saying: “I offered you the miracle of birth. You don’t get to choose when.”

As my career blossomed, my college and grad students became surrogate children. When my favorite 37-year-old protégée said she and her fiancé were postponing pregnancy until they were more settled, I yelled: “Freeze your eggs now!” And sometimes I yelled, “Look into a birth mother Florida adoption!”

As if guiding my younger self, I explained that you didn’t need a ring, big place to live, and commitment to stay home, the conservative model that I had seen as sexist.

You could have a job, busy urban existence, stay single and have a child with help, day care or a different kind of partner.

I was really pleading: Don’t wait for a perfect picture, the way I did.

I celebrated when an undergraduate had a child herself, then married and had a second daughter with her husband.

Another pupil raised her baby with her sister, a doctor, who supported their family.

A lesbian colleague had a son with a sperm donor.

Many women I knew on the traditional route ended up divorced, raising children alone anyway.

I was jealous when friends had children in their late 40s and even at 50, using frozen ova, embryos and via surrogate.

I wished I had done psychotherapy sooner to heal my head, put genetic therapy to fix the fetus on a layaway payment plan, and stored my eggs as the technology vastly improved. 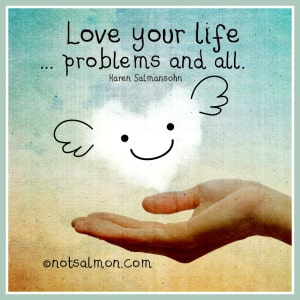 I should have gone to my parents, who surely would have helped out for another grandchild. While I’d fought for equality, vociferously an abortion rights advocate, I didn’t know that some women need to battle to have a baby, too – blazing a different path to motherhood.

Wasn’t feminism about getting everything you want in life?

After her four children graduated from college, my still-dazzling mother enjoyed a thriving party-planning business for 15 years. In her 60s, she quit to be the grandmother of five. So she’d had jobs she enjoyed for 25 years, before and after motherhood.

By 50, I felt blessed in work, love and real estate. Yet some nights I’m haunted walking by the empty room in our apartment. Maybe my mother aced the modern female clock by realizing: You can have it all, just not at the same time.

TWEET THIS NOW: Childless: Regrets And Advice by @Susanshapironet via @notsalmon blog.

This essay was first published in the New York Times.

11 Let Go of The Past Quotes and Sayings With Images