Want to develop your intuition and strengthen your intuitive abilities? Here’s some interesting research, techniques and insights. Read on…

I’ve witnessed the amazing powers of intuition – and been incredibly thankful for trusting my gut.

Unfortunately I’ve also suffered the consequences of not listening to my intuition – because I didn’t take its warnings seriously.

With this in mind, I decided to research a logical way to understand intuition!

My goal: I wanted to explore why (and if) I should take my intuition more seriously.

Today I’m sharing what I learned! Plus I’m explaining in clear terms the reasons why I firmly believe “gut instinct” is a powerful force we should all perk up and pay more attention to.

There are 2 schools of thought about how your “gut instinct” transmits information.

The traditional school of thought on how to develop intuition

Intuition is an animal instinct transmitted by your subconscious mind. All animals have this animal instinct, to just do without thinking—every animal from a human to, say, an armadillo.

Yes, unlike a human, an armadillo just does what its animal instincts tell it to do—without over-thinking or under-thinking. (Interestingly enough, armadillos also don’t get ulcers like humans do.)

Some questions Google can’t answer - but journaling can. Learn about my INSTANT HAPPY JOURNAL.

Chances are you as a human presently rely on your animal instincts a lot during a single day—and don’t even know it. 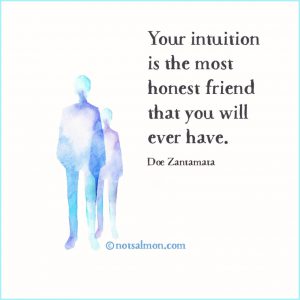 For example, every time you distinguish at a glance the meaning coming from facial expressions and the message coming from “vibes” of romantic interest…or anger, sadness or fear, you are using your gut animal instincts.

Biologists even have a logical explanation for how our facial- and vibe-assessing abilities work.

They explain that our brain is comprised of emotional pathways that run from the eyes to the emotional control centers, bypassing the cortex.

Because of this setup, we can often find ourselves reacting emotionally to someone, even before we’ve had time for that conscious “cortex” rational analysis.

Then, after the cortex catches up and interprets the situation, the conscious brain reacts and can affect what you think about a person and what action to take.

Translation to the translation:

Think of your brain as a library of information  – and your animal instincts as the librarian.

Every day you are gathering information and 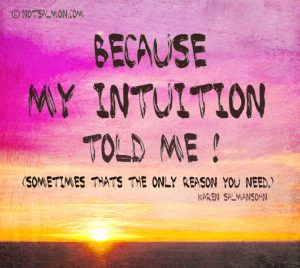 storing it on your brain’s different memory shelves.

This stockpiled warehouse of information is always available—but rather unwieldy.

Basically, it’s impossible to have all this information show up in your conscious mind at the same time.

And so this is why it’s often hard to make decisions.

It’s familiar with every piece of stored data. When you learn to trust this librarian, it can speedily narrow focus and fetch all the needed info from your brain’s information warehouse.

The progressive school of thought on how to develop intuition

Another way to describe intuition is to say that it is thinking that occurs not “onstage,” but “offstage”—outside our field of vision.

According to some very smart folks like Albert Einstein and Carl Jung, this offstage area is your “collective unconscious”—a universal consciousness comprised of universal energies and thoughts.

Jung wrote a lot about the powers of the collective unconscious!

He explained how each of our brains is actually blessed with a shared energetic byproduct passed down through millions of years from our ancestors.

Jung believed we could tap into this communal mind, thereby sharing the same “thought resources” of all humans.

Basically, your collective unconscious is like an infinite world wide web of information.

beyond your finite conscious brain library.

Well, according to both Jung and Einstein, when you tap into your gut, you are accessing this infinite world wide resource of thoughts.

As a result, your gut helps you to know more than you alone should know—because you have access to infinite information.

Einstein readily confessed he relied on this infinite resource of the collective unconscious for his ideas!

He admitted he often “knew” a scientific answer even before he’d proven it! And then he’d do his research after he made his conclusions.

“The intellect has little to do on the road to discovery,” said Einstein. “There comes a leap in consciousness, call it intuition or what you will, the solution comes to you and you don’t know how or why. The truly valuable thing is the intuition.”

Einstein wrote a lot about intuition and how he believed it sprung from the infinite world wide resources of the collective unconscious.

“A human being is a part of a whole, called by us universe, a part limited in time and space. He experiences himself, his thoughts and feelings as something separated from the rest… a kind of optical delusion of his consciousness.”

Basically, when you tap into your intuition you are tapping into a large field of information transmitted from the collective unconscious.

So, whenever you have a gut feeling about a person or situation, it’s because you’re receiving information (that you don’t yet know with your conscious mind) via the pipeline from this infinite information resource.

It’s as if your individual brain’s thoughts are part of a larger “group brain network” of thoughts.

A single ant doesn’t usually have much on its little mind. But if you put a single ant with a group of other ants, it miraculously develops the ability to think brilliantly—gathering food, carrying this food up a hill, digging holes, encircling a dead bug. Just look at any group of ants working together.

It’s as if this “group brain” takes on its own higher level of intelligence.

Interestingly, studies show that the more ants in a group, the more effectively the ants create their group plans.

Even if some ants are merely “passive observers,” their activity is improved.

And when you get a gut instinct about someone or a situation, you’re thinking with the higher intelligence of this group brain.

Jung believed this group brain—this collective unconscious—explained why a single idea germinating in a single mind could become a movement or trend very quickly.

And we’ve all witnessed the rapid speed with which an idea can spread.

Jung also believed the collective unconscious explains why humans all seem to share a mutual love for specific images, archetypes and themes in religion, mythology and dreams—because we all share the same “group brain network” of thoughts.

Modern-day best-selling author and business columnist James Surowiecki also writes about the power of ”group brain” in his best-selling book The Wisdom of Crowds: Why the Many Are Smarter than the Few and How Collective Wisdom Shapes Business, Economies, Societies, and Nations.

Throughout his book, Surowiecki argues that “under the right circumstances, groups are remarkably intelligent, and are often smarter than the smartest people in them.”

For a variety of reasons – some psychological and some anthropological – your intuition is a valuable asset.


Start writing in my Listen to Your Heart Journal

Listen to Your Heart Journal

Bad Bosses: 6 Tips for Talking to and Coping With Them

5 Questions to Ask Yourself Before Changing Careers